The 4 Types of Improvisers 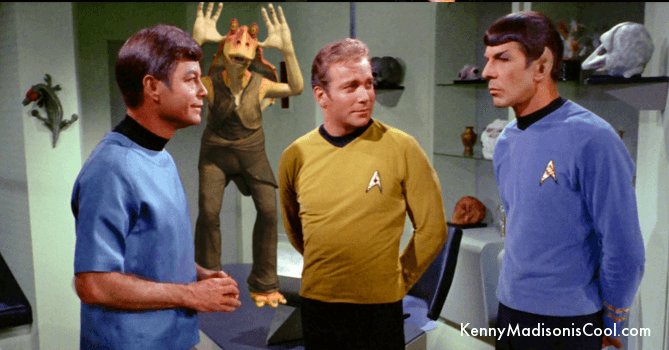 Originally posted as “Kirk, Spock, McCoy, & Jar-Jar” on Dec 9, 2015 at The Institution Theater

In my time doing improv, I have identified four communication styles. These styles translate to how folks work on stage (big surprise, right?). By no means is this a concrete list of how people function.

The original series of Star Trek deals in clear cut archetypes that are a raw personification of the human ego. However, not everyone wants to understand Star Trek, so here are common tongue translations.

Let’s break it down.

Dr. McCoy is a Southern doctor who is all emotion. He doesn’t exactly do the smartest thing, but he does what he does because he “thinks” it’s the right thing. He’s a bit loud, a bit cantankerous, and completely wonderful.

McCoy’s are driven by emotion, which carries over into their communication style. They invest in relationships both in the work and outside of the group. Because they feel, they need to know they are being listened to or else they take it personally.

Their work on stage is full of passion. You may have never seen a juggernaut like this before, but they play this part so well. You can feel their heart in things one hundred percent.

To get the most out of their time, they may need to connect to people a bit more than any other communication styles. McCoy is loyal and wants to love and be loved.

Spock is logical. He is precise, detail oriented, and incredibly intelligent. Below his exterior, he still has an emotional core. He just processes things differently.

This is the detail oriented person in the team. They ask a lot of questions and get things figured out in the most thorough way possible. Spock needs time to process things to move forward with their work.

On stage, they are either a sniper or too much in their head. Because they are so detail oriented, they use their brain differently. They see the roles that would wring the best storytelling and use it. They might also stand to the side and wonder why they are having a bad show, keeping them from play.

They may seem quiet or non-participative, but that’s the opposite of how they are. They have huge hearts. A Spock just doesn’t broadcast it on the outside. If they give a compliment, it’s a big deal. Listen to their ideas and let them know they are important.

Kirk is a controlled force of nature. A Kirk knows how to get goals accomplished. They may rally, direct, and steer the group in great directions.

Kirk is a versatile player. They are combinations of Spock and McCoy on stage. They can be passionate and fiery or snipe in the perfect moment.

Kirk is a great, fun person to be around. They seem to be bigger than everyone around them, but Kirk’s need you just as much as you need them.

Kirk’s are meant to lead, but they are big picture. A Kirk needs detail-oriented people around to keep them emotionally grounded. Without the detail people, Kirk would just be a womanizing imperialist. With Spock and McCoy, he can see the big with the small and make the right decisions.

Jar Jar is from Star Wars. He doesn’t belong here, but he puts himself in everything anyways.

Jar Jar can be one of two things: terribly annoying or well intentioned and just unaware of what he is doing.

A Jar Jar will insert themselves into every scene and commandeer the focus. Using their own ideas and overwhelming energy, they can suck the life out of other performers and leave the team unhappy and angry.

Weigh the value of having a Jar Jar on your team. Do you value their friendship, but they just don’t listen to the directions given by the group? Are they listening but they’re just not grasping the concepts?

It’s always uncomfortable to find someone that’s not a fit. It’s going to happen. No one gets things right off the bat. More often than not, Jar Jar’s will remove themselves from the group. However, it is best to be direct and address the issue head on. Letting a Jar Jar ruin the joy levels of the group makes it a bad time for everyone, not just yourself.

Need a Coach to Identify Your Improviser Style?

Contact me for a 2-hour diagnostic session, where I run you through rapid exercises to diagnose your improv reflexes. Working with your group, can put you in Kirk, Spock, McCoy, Jar-Jar, and other categories, and help your group identify places it can improve itself.