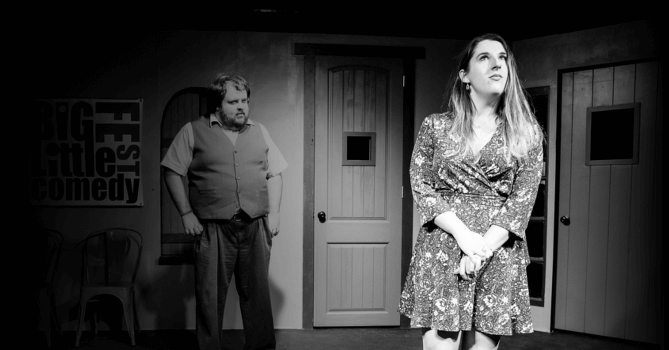 Originally posted at AustinImprov.com on December 4, 2014

Let me ask you a question. Be honest.

Chances are you like the part where the stuff blows up. Let me blow your mind, though: it’s not just because explosions are cool—it’s because they’re action.

“Yeah, dummy, it’s an action movie,” you yell at the page before you. “What a waste of time.”

Let’s take it back to improv. People are there to be entertained, and it’s up to you to entertain them. So how, exactly, do you do that in the best way possible?

You keep the Hot Spot hot.

The Hot Spot is the audience’s focus. Imagine a physical place on the stage that actually transmogrifies into something tangible, so long as the audience is looking at it. All of their hopes and dreams of being entertained exist in this one part of the stage, and it’s up to you to make their dreams come true.

The best and easiest way to keep your audience engaged? DO SOMETHING.

Anything. Everything. Do things.

I can’t tell you how many improv scenes I have seen where the players do nothing. The audience is waiting for the story to unfold. The longer you take in making a decision, the more their attention wanders, and the worse your show is.

Okay, back to explosions. It’s very difficult to create explosions in improv. It’s much easier to talk to another person, but the conversation has to be propulsive. Like the explosion, it has to move.

A great way to make your scenes move is by imbuing them with purpose. Give your characters a goal when they walk onstage. Also, whether you succeed or fail, have them try to accomplish their goal as soon as possible. Urgency breeds quick decision-making, which means more things are happening, which entices the audience to keep up.

That’s not to say that you have to rush every single thing in a scene. One of my very favorite improv scenes was about summer romances; we were told to make some kind of emotional connection. It was slow. It was calculated. It was also incredibly fun to play.

I couldn’t joke my way out of this scene. I could inject some levity, but I couldn’t just have the Moon Knights bombard the stage. What kept the Hot Spot hot were the subtleties: body language, facial expressions, the way a certain word was said, the tone of the scene as a whole. And because it was so slow and quiet, people were waiting for the next beat. Each line propelled the scene a tiny bit forward and revealed just a little bit more. It might be my favorite thing I’ve ever done.

Improv starts sucking when a person doesn’t trust themselves enough to make any decision. You could go make a sandwich. The audience doesn’t care; they just want to see something.

I know it’s hard to trust yourself. I have self-esteem so low, some people would say I have low self-esteem. But, since you’ve made the decision to be an improviser, that means you have the upper hand on the audience. You can do anything you want and they will like it. The only thing they won’t like is doing nothing, which is not a choice. It’s dumb and I hate it.

You’re brilliant. You’re a master. You are funny and smart and amazing. Let them see it. Make a decision to make the best turkey sandwich on the planet. Just do it.

Need an Improv Coach to Help You Keep the Hot Spot Hot?

Fill out the form above or contact me to create a customized coaching plan for you and your troupe. I work out of Austin, TX, but am also available for specialized one-off workshops in your hometown and even Skype coaching (just ask the Blue Dome Social Club!).