Into the Spider-Verse and Survivor’s Guilt 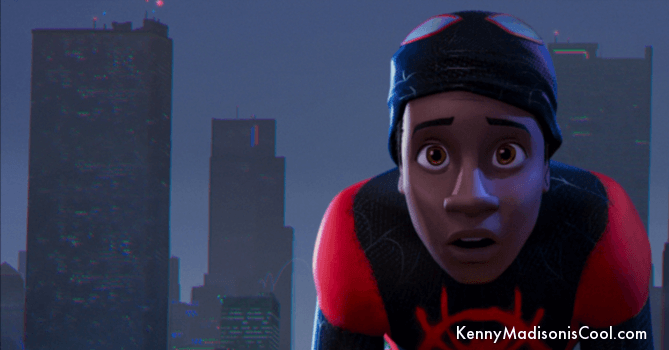 Miles Morales doesn’t think he deserves to be a hero. But that’s why he is the perfect hero.

One of the many reasons why Spider-Man: Into the Spider-Verse is so revolutionary is its depiction of something so many of us go through every day – the basic negotiation of self-worth. Really, the only superhero film I can think of that tackles this topic is Iron Man 3. And IM3 only tackles it because it deals with the circumstances and consequences of the previous film, which throws Tony Stark into a tail-spin where he has to realize that, no, he’s good enough.

However, Stark has more money than the rest of the MCU combined. Miles Morales is a product of chance, the same as Peter Parker and many others. Unlike Parker, Stark, and others with crises of identity, Morales doesn’t think he deserves to be Spider-Man.

A genius part of Spider-Man: Into the Spider-verse is its underplaying of examining the connection between socio-economic status and mental health. Which is not something I expected to ever think nor see in something as populist as Spider-Man, but here it is.

Miles comes from a public school. He lives in what appears to be a small apartment. He is also mixed race, but the film is not interested in that at all. Instead, Spider-verse focuses on issues of class and self-worth.

On his way to school, Miles and his father, Jeff, get into a conversation about how Miles wants to go back to his old school. But he has this chance to go to a prestigious school.

But, by random chance and fate, he was picked. And his father will not let him pass an opportunity like this up because he doesn’t feel deserving. Unlike other superheroes, Miles feels guilt at his fortune.

This stands starkly against so many cisgendered white male protagonists at the front of superhero fantasies. Can you think of any white heroes who don’t want to be heroes because they think they are not allowed to be? Bruce Wayne rarely turns his wealth away, instead using it to fuel his tiny war machine. Same goes for Captain America, Iron Man, Superman, and many other superheroes. Even in Spider-Man: Homecoming, Peter simply just tries harder when he’s up against the ropes. Parker believes he is Spider-Man.

Miles is different – he’s a product of circumstance and feels survivor’s guilt. He doesn’t think he deserves to have power.

The Problem of Destiny

Miles gets bitten, turning him into a Spider-Man by coincidence. Around the same time, a dimensional rift opens, revealing 5 alternate Peter Parkers (more or less), all of whom are far more secure at being Spider-people.

And there’s only one Miles.

The others are products of destiny – Peter Parker is supposed to be Spider-Man. There can’t be more than one, yet here they all are, and they are all tied to the identity of Parker. We have Peter B. Parker, who is literally an alternate dimension Peter Parker. We have Gwen Stacy, the formerly doomed love of Peter Parker. Now she is made into her own Spider-hero. Even Spider-Ham’s secret identity is Peter Porker. These characters are supposed to be Spider-Man because of where they come from.

Then there is Miles, who has no ties to Parker except for one chance encounter.

Miles’s feelings of self-worth implode upon seeing that the other Spider-Men are all “supposed” to be there. He can’t identify himself in the others. But he’s there, among the Spider-people, so he has to try to do something to send them back to where they came from.

Tying destiny and representation to each other is a master stroke of storytelling. This rebukes so many chosen one narratives of the past. While those in power can talk of destiny, those not in power have to make their own way.

The Journey to Self-Worth

Peter B. Parker puts it all in succinct terms in a moment of self-doubt to Miles. As the film unfolds, we see that Miles’s burgeoning spider powers are out of control. Taking the keystone scene into account, the control issues aren’t due to a lack of knowledge. Previous iterations of superhero films (including the Spider-Man films) would just have our character go, “I’m Spider-Man, so I must be able to save the day,” and just try harder. The biggest thing standing in Miles’s way is himself.

Miles doesn’t know when he’ll even be secure enough to be Spider-Man. So, when Miles asks, “When do I know I will be ready?”, Peter responds:

It’s a choice. Unlike other Spider-people, the choice isn’t to learn, “With great power comes great responsibility.” Miles is supremely responsible. He constantly looks to any authority figure he can to help navigate him through his life.

Miles doesn’t just try harder and do better so he can win the day. Instead, he relaxes. Stops trying so hard. And finds out how to do it his own way.

This is galvanized by his father saying that, “There’s a spark in him [Miles] that is so special,” these intimate words giving Miles the self-worth he’s been lacking the whole film. It’s not skill, knowledge, or some other thing that unlocks Miles – It’s realizing he deserves to be Spider-Man. While coincidence and circumstance might have given him the power, it’s up to him to decide what to do next.

He goes his own way because he has made the choice to trust himself. He deserves to be Spider-Man. He was given this opportunity, so he should use the power within. He shouldn’t be scared of his newfound power.

To Miles, and the millions of others that doubt if they deserve the good things in the world, with great power comes great guilt. But you deserve to use that power because you’re here, in this world. So use what you have. Because you have it. And no one else has what you have because you’re you. You matter.

The Case Against The Apocalypse (in Movies)
December 9, 2018
Leave Comment