How to Get Better at Improv 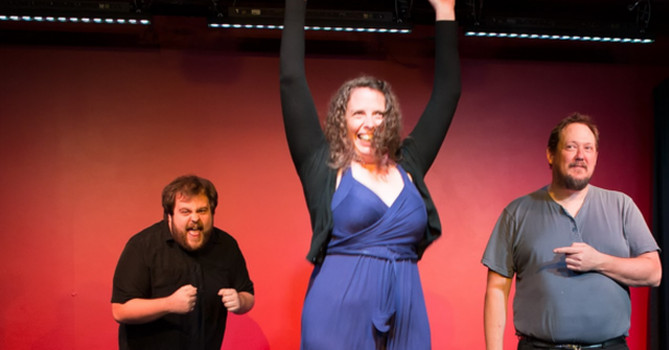 (Note: I’m not going to cover the “rules” of how to enhance your work on-stage because the more you do this, the more you will find your own rules. Doing these things will present their own rules for improv to you. If you’d like proper rules, check out this great list from Dan Goldstein.)

Pay attention to everything you see, hear, say, and want to say about improv. The more notes you take, the clearer your creative philosophy will be. Plus, if you start teaching or need to reference something quickly, you’ve got it!

You are doing something that is meant to be consumed by other people. While I ultimately endorse that you do improv for yourself first, you also have a give-and-take with the audience. If you show up and you smell like an overflowing septic tank, people will not like you and will not want to be around you.

What you wear broadcasts who you are and what you want to put out there. Dressing nicely automatically puts you on a pedestal when improvising because…you dressed nicely. This sets up the expecation that you prepared, which lets the audience (and others) trust you more.

3. Shut up and listen

If you’re on stage and you’re new, you have a predilection to talk to much. Your work and your life will enhance itself tenfold if you stop talking, breathe deeply, and figure out how you feel (both on stage and off).

By shutting up on stage, you have the added benefit of acting with other things besides your mouth and wit. You can decide how you feel, articulate that through your character, and move on without feeling desperate.

By shutting up off stage, you can hopefully take in more of the world around you and draw inspiration for your life and your creativity.

Know your limitations and know your passions. If you are taking three classes at a time because you are passionate about it, go do it. But, if you’re taking classes out of compulsion and not passion (i.e. you want the visibility more than the education), you’re not in it for the right reasons and you will burn out.

Invest your time in the things that bring you joy or advance your passions. For example, Jazz Freddy had a policy where they were allowed to do one troupe, which was themselves. They committed to the work they were doing and created something legendary.

5. Commit to doing it twice a week

Twice a week. Go see shows, rehearse, do something improv related no less than twice a week.

Improv is instinctual. Because of that, you need time to develop the things that will tweak those instincts so you have better improv reflexes.

With your group or show, make sure you do at least one rehearsal a week. If you do it once every other week or sporadically, it becomes a fun afterthought. If that’s your goal, good on you and stick to that.

If you’re serious about the work, invest the time. For shows I’ve directed, we’ve had one rehearsal and one mandatory hang out session. The work was work and the hang out session brought us closer together as a group. That group dynamic translated to trust on stage during rehearsals, which translated into superb work on stage. A little regularity can go a long way in changing the way you think about the work you do.

(Full disclosure: I’m guilty of not seeing shows as much as I should. I hate seeing improv shows because seats are uncomfortable and lines are long. That means I’m doing it wrong.)

If you’re looking to get better, see all the shows. Then, figure out what you liked about those shows and what you didn’t like. These assessments should refresh your general creative direction. Plus, if you don’t see shows, your work stagnates, which is no fun.

Borrow exercises. Borrow show concepts. Borrow tools you can put in your improv belt that will help you become a better handyman. Don’t steal jokes or characters because that’s dumb. Use exercises and other things from workshops to help you become the improviser that you are meant to be. I stole ideas for this blog from other, more reputable blogs.

There’s a fine line between theft and using. If you are stealing, you’re never giving credit. Give the credit to the person that you’re stealing from, then use that idea. But, for the love of all things holy, don’t not use an idea just because someone else used it. Many ideas go out into the aether and never come back because some sadsack was too polite to go, “That’s a good idea, but it’s not mine. I need to have my own idea.”

When was the last time you called up an improv buddy “off-hours” and asked them to hang out?

If you want to be better at improv, stop doing improv and go be a friend. Don’t talk shop, don’t try and do bits. Be genuine, be real, and be there for each other. Be human at one another.

9. Get your ego out of the game

This might be the hardest one. If you want to get good, you are going to have to develop tough skin. To get good, you have to be willing to hear the bad stuff about yourself and realize that you’re not the genius that you think you are.

Very few people in improv want you to fail. If they do, they are sycophants and should be discarded ASAP. For the most part, we all want you to succeed. So try not to take it personally and, if you do, get in therapy to figure out why you’re taking it personally.

Get someone that knows what they’re doing. They bring a notebook, they have a lesson plan, and they change your world when they coach you. Find the one that’s right for you and don’t use someone just because everyone else recommends them. Find a really great coach.

Like me. I know what I’m doing. You can hire me as a coach for your group. I also do Skype sessions to share my insights. Because I’m a great coach.